This page describes a tool I wrote many years ago (in the case of AudioPaint, it was created in 2002). You will probably need to fiddle around to make it work on a recent machine (hunt down old MFC libraries etc…) and I don’t give any guarantee of any sort about its state or usefulness. To make it short: you are on your own!

AudioPaint generates sounds from pictures. The program reads JPEG, GIF, PNG and BMP files and translates each pixel color and position into frequency, amplitude and pan information. AudioPaint can therefore be considered as a massive additive synthesizer. 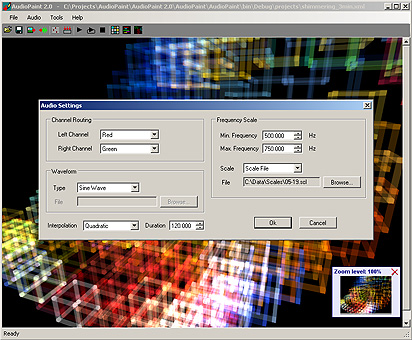 By default, the color of a pixel is used to determine its pan, the red and green components controlling the amplitude of the left and right channels respectively (the brighter the color, the louder the sound), and the blue component is not used. The action of each component can be modified in the Routing section of the Audio Settings window. Starting with version 2.0, AudioPaint can also convert the color components into HSB values, and use hue, saturation and brightness instead of red, green and blue.

Depending of the picture, several hundreds (or even thousands) of oscillators can be generated simultaneously. Due to the large amount of data to process, AudioPaint is not real-time. Once you chose your picture and the parameters, you generate a sound. Then you can save it as a .WAV file for further processing in a sound editor such as Sound Forge / Wavelab etc…. or to import it as an audio track in a sequencer (Sonar, Acid etc…).

Of course the sounds generated will vary depending on the type of picture used. I tested AudioPaint with pictures taken by the Hubble Space Telescope and available at the Hubble Heritage Gallery of Images. The results are complex and fascinating futuristic soundscapes, especially with long durations. Generative graphics, which usually exhibits a lot of colors while having a geometric composition, work especially well.

But you can really try any type of picture: maps from Google are also a good starting point for your sonic exploration, as well as paintings of Picasso, Monet and other great artists. Starting with AudioPaint 2.0, it is even possible to acquire random (but suitable) pictures from the Internet directly from the program.

And of course, don’t hesitate to create pictures especially for AudioPaint, in PhotoShop or a similar graphic package. By playing with geometrical shapes and colors, you can create very interesting sounds.

Here are a few sounds generated with AudioPaint. There has been no post-processing and no effects added.

Click here to download AudioPaint. Unzip the file and run the installer. Make sure you read the documentation (the AudioPaint.pdf file).
If you can’t run this program, please update Microsoft .Net Framework to version 2.0 or higher.