An introduction to ADX2 from CRI Middleware

There is a new game audio middleware in town and it’s rocking hard! Except… it’s not really new, has already been used in more than 3000 games and offers all the features you would expect from such a tool, and some more: DAW-like interface with plenty of interactive functions, proprietary audio codecs for blazing-fast playback, an API which is super-easy to work with and to integrate into your game etc…

How is this possible I hear you ask? Discover ADX2 from CRI Middleware (@CRI_Middleware), one of the best kept secrets of the game audio industry and the de facto standard in Japan, now finally coming to the West.

A DAW for your game audio

ADX2 is composed of an authoring tool (AtomCraft) and a run-time API. AtomCraft looks and feels like a usual DAW, one which would have been built for game audio. That’s probably why the learning curve is so gentle, compared to say something like Wwise. At the same time, when you really need some hardcore interactive features, ADX2 does not stay stuck in the DAW paradigm and will offer you the full power of a game audio middleware, but in very natural way, with arguably one of the best user interface available today for this type of tool. 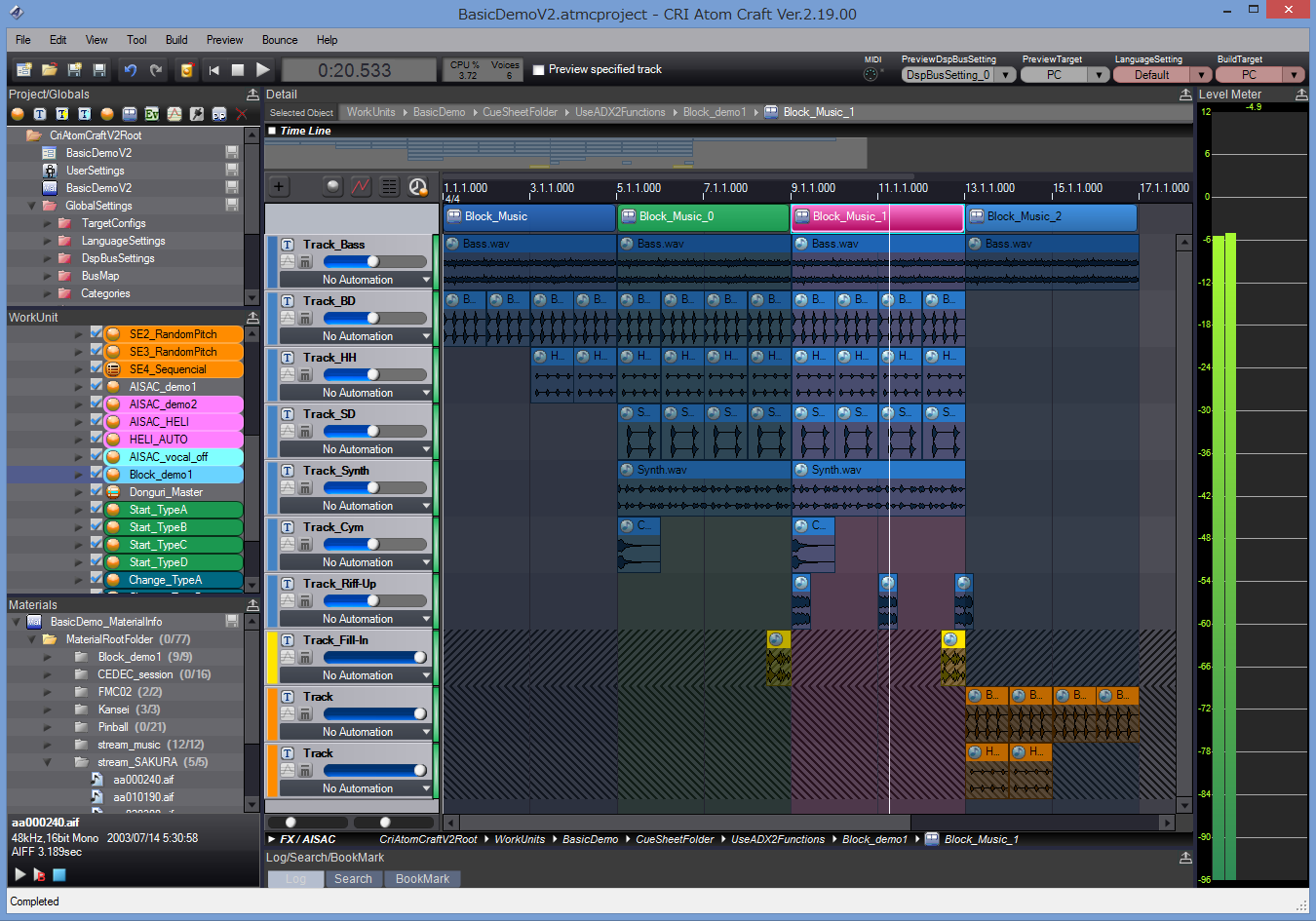 In AtomCraft, you design Cues that will be triggered from the game and are organized in CueSheets (i.e. sound banks). A Cue is composed of one or more Tracks. Each Track can in turn have one or more waveforms placed on a timeline (they can have different encoding, filters etc…). The way these Tracks are played when a Cue is triggered depends on the Cue type. You will find a Cue type for all the usual behaviors (polyphonic, sequential, shuffle, random, switch etc…) and even more, like the Combo Sequential type, for example. This type of Cue directly implements a combo-style sound effect: as long as you keep triggering the Cue within a given time interval, it will play the next Track. If you miss that time window, it will come back to the first Track. So drop your samples, select that type of Cue and start your fighting game in a couple of clicks! Of course, you can nest Cues, call a Cue from another Cue etc… Actions can also be added to a Track timeline to insert events such parameter changes, loop markers (at the level of the Track) etc…

If Tracks are useful to create sound layers, the Cue timeline can also be divided vertically in blocks, which is particularly useful to jump from section to section based on the game context (for example when composing interactive music).

Speaking of the game context, to control the sound from the program RTPCs – both local and global – can be assigned to pretty much every parameter (including another RTPC) and they can have modulation and randomization features. RTPCs are called AISACs in the ADX2 vernacular.

To continue with the DAW analogy, automation curves, mixer and effects are of course also available. 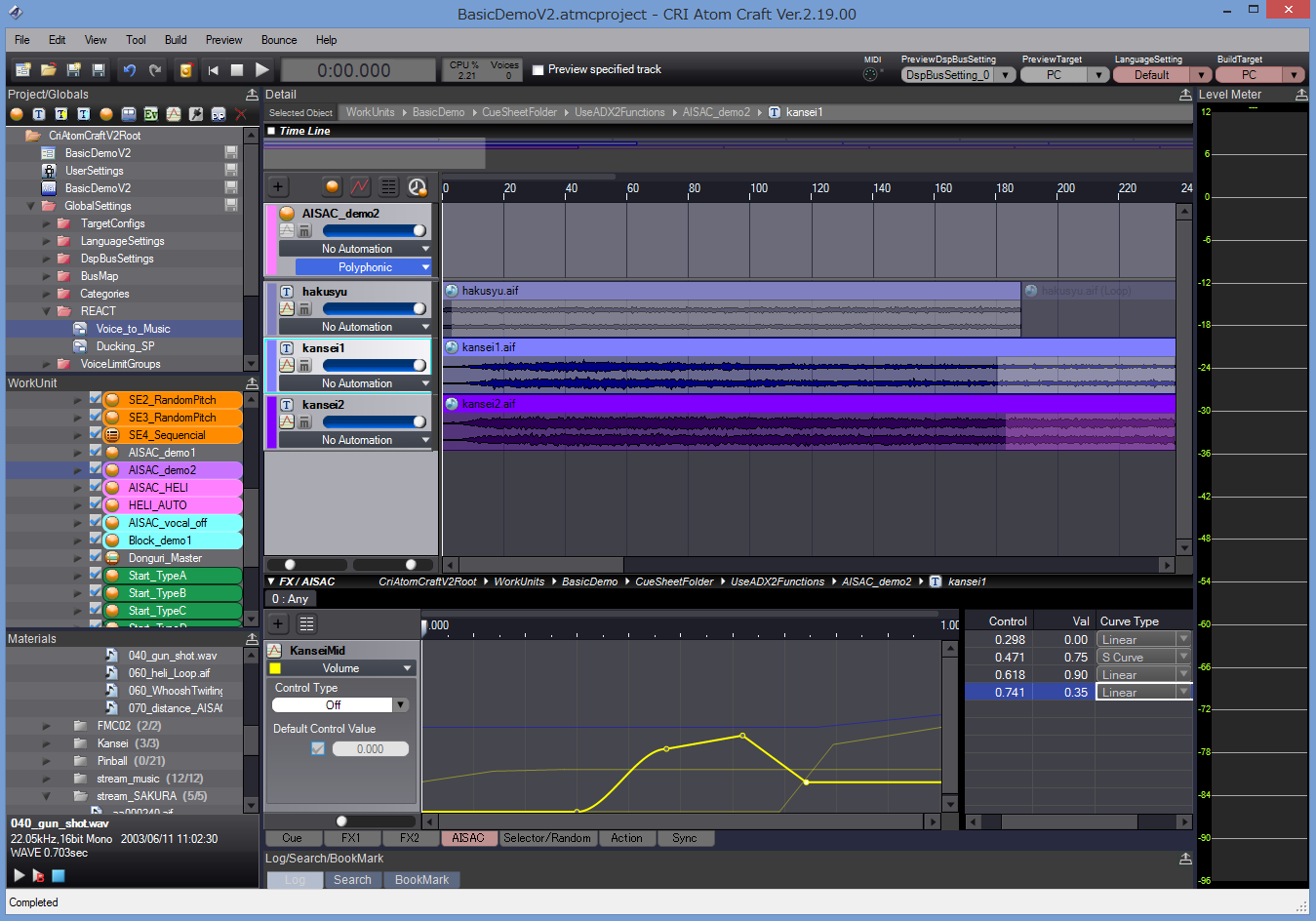 Your idea into the game in no time

Everything in AtomCraft is always a click away. Basic tasks are ultra-fast, while complex interactive behaviors are a pleasure to design. Drop samples from the Windows Explorer onto a CueSheet and the samples will be added to the project as Materials, a Cue will be created with Tracks for the waveforms. You just have to press play! Need a random range on that parameter? Just click on the parameter slider and drag the mouse vertically instead of horizontally: here is your random range.

No need to open a randomizer window or to add a modulation parameter, no need to click many times, open or close windows, features are always there where you need them.
The API has been designed in the same way: uniform and coherent, very easy to learn and to use. Modules are configured, initialized and operated in the same way and API functions follow a clear naming scheme. ADX2 truly empowers both the audio designer and the audio programmer. Depending on the wishes or skillset of your audio team, you can decide to have the sound designers control the whole audio experience, to put the audio programmers fully in charge or a mix of both.

For example, as a sound designer, you could design an automatic ducking system in a few clicks with the REACT feature in AtomCraft (based on the categories the sounds belong too). You could also do it with envelopes or AISACs. The programmer, on his side, could trigger automatic fade-ins / fade-outs with the Fader module at run-time or he could program every single change by updating the volumes of the sound effects themselves or of their respective categories.

The run-time compares favorably with the competition in terms of speed, not in small parts due to CRI’s proprietary codecs (ADX, HCA and HCA-MX), which is especially handy for mobile development. This should not come as a surprise, since CRI Middleware was already assisting Sega Corporation in the early 90s with research into multi-streaming and sound compression technologies, even providing middleware for the Sega Saturn.

ADX2 is part of a middleware package called CRIWARE, which also includes Sofdec2, a video encoding and playback solution with many options, used for example on Destiny. It uses ADX2’s encoder for its audio tracks and share the same underlying file system (if you want to use it).

CRIWARE in general and ADX2 in particular are available on all common platforms from PC and consoles to handhelds and mobile devices.

In addition CRIWARE is available as a plug-in for both Unity and Unreal, making it easy to add top-quality audio and video features to your games. 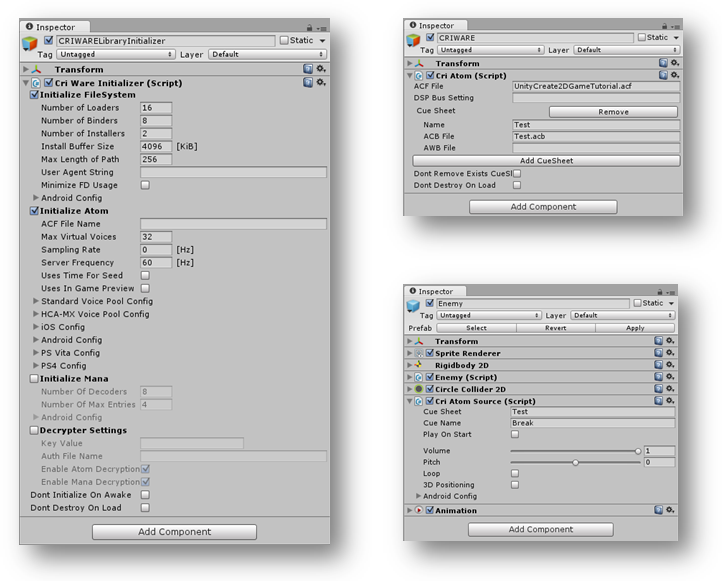 Should you need more information about ADX2, don’t hesitate to contact me; I have been working with it during the past year and have seen first-hand how it can help you implement interactive audio efficiently.

Even better, if you want to see it in action or try the tool by yourself, you can visit CRI Middleware’s booth at GDC 2016 (booth 442, South Hall) or follow their new Twitter account here: @CRI_Middleware for timely updates.

2 Comments to An introduction to ADX2 from CRI Middleware